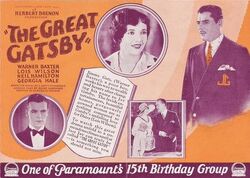 The Great Gatsby is a silent film adaptation of the novel of the same name by F. Scott Fitzgerald. The film was directed by Herbert Brenon, produced by Adolph Zukor and Jesse L. Lasky at Famous Players-Lasky, and released by Paramount Pictures. The film is a famous example of a lost film.