Edit
watch 01:25
Jurassic World: Dominion Dominates Fandom Wikis - The Loop
Do you like this video?
Play Sound
The Great Gatsby 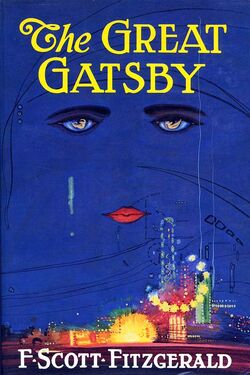 The Great Gatsby is a novel by American author F. Scott Fitzgerald. The story takes place in 1922, during the Roaring Twenties, the post-World War I prosperous time in the United States. The book received critical acclaim and is generally considered Fitzgerald's best work. It is also widely regarded as a "Great American Novel" and a literary classic, capturing the essence of an era. The Modern Library named it the second best English language novel of the 20th Century.[1]

With The Great Gatsby, Fitzgerald made a conscious departure from the writing process of his previous novels. He started planning it in June 1922, after completing his play The Vegetable and began composing The Great Gatsby[2] in 1923. He ended up discarding most of it as a false start, some of which resurfaced in the story "Absolution". Unlike his previous works, Fitzgerald intended to edit and reshape Gatsby thoroughly, believing that it held the potential to launch him toward literary acclaim. Fitzgerald was corresponding with writer Joseph Conrad who has an important literary influence on him and on the eventual shape of Gatsby[3]. He learned from Conrad the technique of using the narrator who is also a marginal participant. Fitzgerald told his editor Maxwell Perkins that the novel was a "consciously artistic achievement" and a "purely creative work — not trashy imaginings as in my stories but the sustained imagination of a sincere and yet radiant world". He added later, during editing, that he felt "an enormous power in me now, more than I've ever had".

After the birth of their child, the Fitzgeralds moved to Great Neck, Long Island in October 1922, a setting used as the scene for The Great Gatsby.[4] Fitzgerald's neighbors in Great Neck included such prominent and newly wealthy New Yorkers as writer Ring Lardner, actor Lew Fields and comedian Ed Wynn. These figures were all considered to be 'new money', unlike those who came from Manhasset Neck or Cow Neck Peninsula, places which were home to many of New York's wealthiest established families, and which sat across a bay from Great Neck. This real-life juxtaposition gave Fitzgerald his idea for "West Egg" and "East Egg." In this novel, Great Neck became the new-money peninsula of "West Egg" and Manhasset the old-money peninsula of "East Egg".

Progress on the novel was slow. In May 1923, the Fitzgeralds moved to the French Riviera, where the novel was finished. In November 1923 he sent the draft to his editor Maxwell Perkins and his agent Harold Ober. The Fitzgeralds then moved to Rome for the winter. Fitzgerald made revisions through the winter after Perkins informed him that the novel was too vague and Gatsby's biographical section too long. Content after a few rounds of revision, Fitzgerald returned the final batch of revised galleys in the middle of February 1925.

The Great Gatsby received mostly positive reviews when it was first published [5] and many of Fitzgerald's literary friends wrote him letters praising the novel. However, Gatsby did not experience the commercial success of Fitzgerald's previous two novels, This Side of Paradise and The Beautiful and Damned, and although the novel went through two initial printings, some of these copies remained unsold years later.

When Fitzgerald died in 1940, he had been largely forgotten. His obituary in The New York Times mentioned Gatsby as evidence of great potential that was never reached.[6] Gatsby gained readers when Armed Services Editions gave away around 150,000 copies of the novel to the American military in World War II.

In 1951 Arthur Mizener published The Far Side of Paradise, a biography of Fitzgerald. By the 1960s, Gatsby's reputation was established, and it is frequently mentioned as one of the great American novels.