The Great Gatsby Wiki
Register
Don't have an account?
Sign In
Advertisement
in: Characters, Females, Spouses,
and 2 more

Daisy Buchanan is a character in The Great Gatsby. She is the wife of Tom Buchanan and serves as Gatsby's love interest. She is also the cousin of Nick Carraway, the novel narrator.

Daisy Fay was born in 1899 to a wealthy family in Louisville, Kentucky. Like many women of the time, she marries for money, particularly to Tom Buchanan. She and Gatsby fell in love when he was a soldier and she promises to waiting for him when he went to the war, but when Gatsby went to war after a few years she married Tom Buchanan. The day before her marriage she drank and she cried when she received Gatsby's letter which shows some regret, but the next day she feels content about the marriage.

Daisy is characterized as a shallow, careless, and at times, a cheerful person. However, she is not as ignorant and fun-loving as she portrays herself to be.

In reality, she might be slightly misunderstood. She is stuck in a marriage with her husband, Tom, who cheats on her with his mistress Myrtle Wilson who is the wife of George B Wilson. 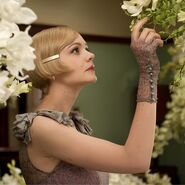